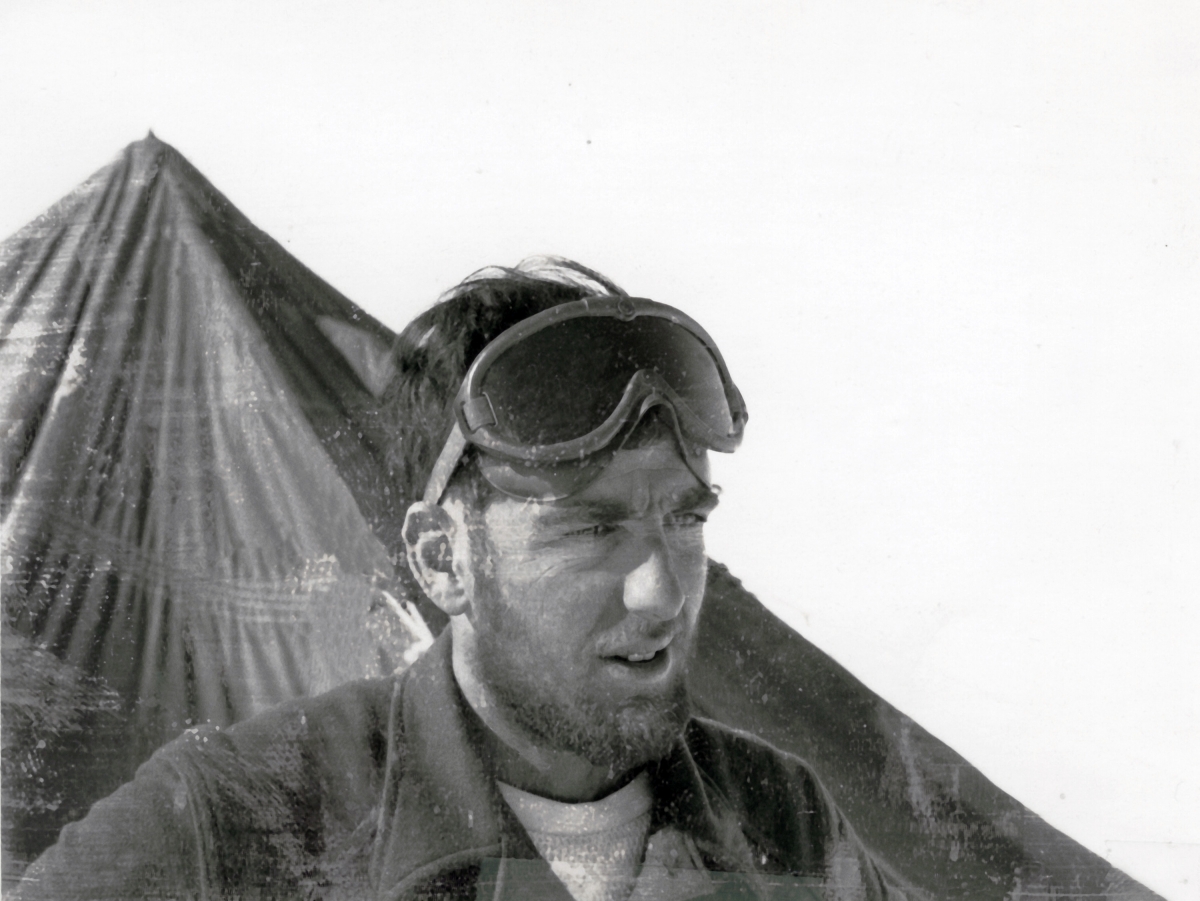 From the early 1950's through the mid-1960's, U.S. polar ice coring research was led by two U.S. Army Corps of Engineers research labs: the Snow, Ice, and Permafrost Research Establishment (SIPRE), and later, the Cold Regions Research and Engineering Laboratory (CRREL). One of the high-priority research projects recommended by the U.S. National Academy of Sciences/National Committee for IGY 1957-58 was to deep core drill into polar ice sheets for scientific purposes. To this end, SIPRE was tasked with developing and running the entire U.S. ice core drilling and research program. Following the successful pre-IGY pilot drilling trials at Site-2 NW Greenland in 1956 (305 m) and 1957 (411 m), the SIPRE turned their attention to deep ice core drilling in Antarctica for IGY 1957-58. Dr. Anthony J. (Tony) Gow (CRREL, retired) was one of the scientists on the project. In March 2008, the NICL-SMO had the opportunity to sit down with Dr. Gow and talk about the ice coring at Byrd and Little America V during IGY 1957-58. 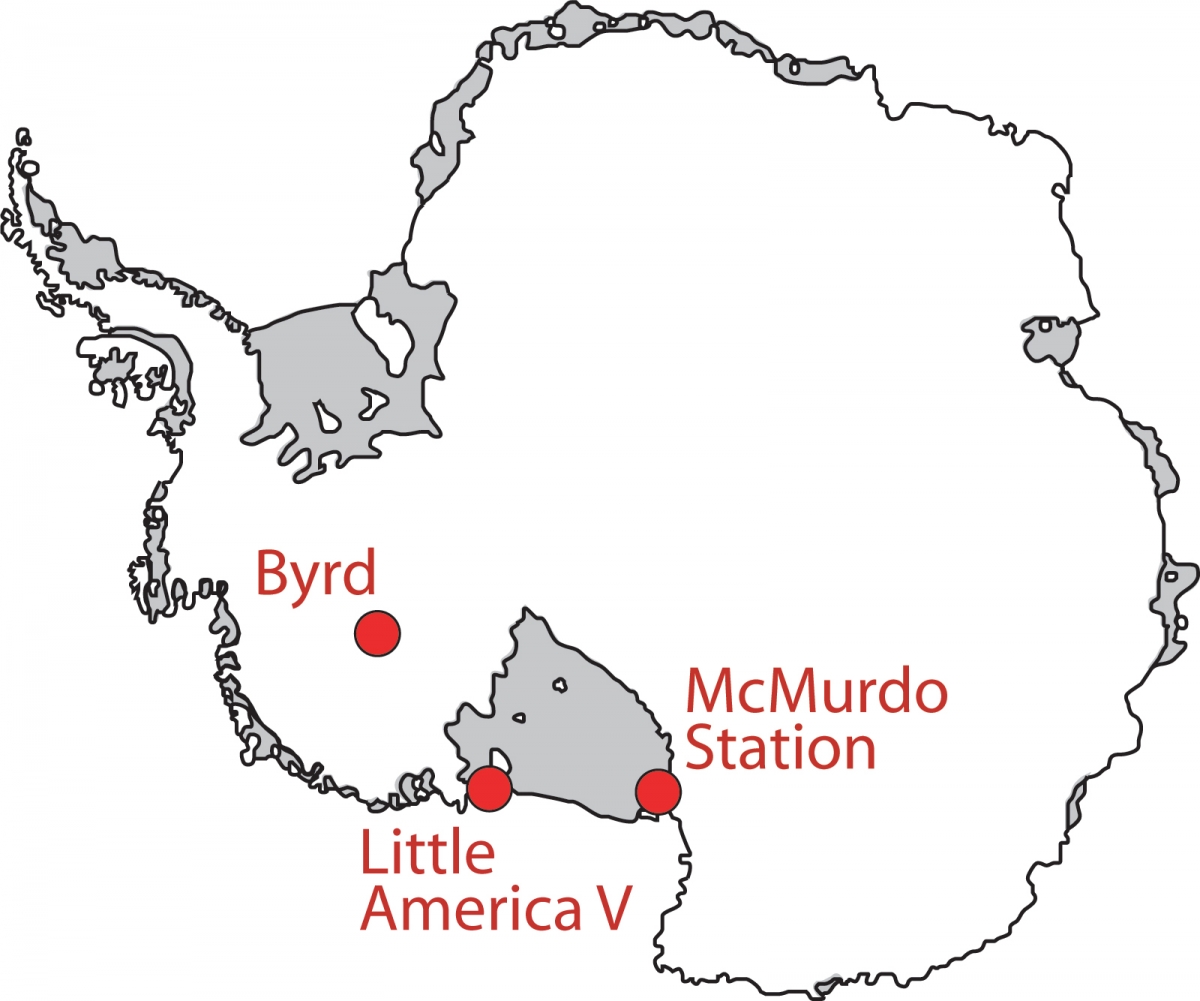 NICL-SMO (SMO): How did you get involved in IGY?
Tony Gow (TG): I was at a winter tournament in Auckland, New Zealand. I was a cross- country runner. They were having all kinds of winter sports and they call that the "winter tournament". There was a phone box; one of these big red boxes, and the phone rang in the box.

Somebody went over to the phone and picked it up and then came over to me and said "Professor Clark is on the phone for you" [from Victoria College in Wellington]. I picked up the phone and he said, "I got a call from Dick Goldthwait". Dick was on a Fulbright at Canterbury University at the time. And he had called Prof Clark up and said there was an American drill crew who were looking for some international flavor and they were seeking applications from people around the world.

And he said, "I think the outfit is called SPIRE". Well, what he meant was SIPRE: Snow, Ice and Permafrost Research Establishment in Wilmette, Illinois. So I answered the Prof's questions and he said, "Would you like to apply for the job?". And I said, "Well, yeah".

I had been working on volcanic rocks at that time. I had taken my Master's in Volcanology and going to Antarctica was a complete reversal of fire and ice. I thought they were going to be drilling into Mount Erebus or some volcano. I had never been in a snowstorm in my life. I had seen snow in the hills, but that was the closest I had ever got to snow.

So, I said, "I'll apply". Bill Marshall was the project leader [for SIPRE]. He sent me a telegram and said "Pleased to accept you for expedition. Need hat size, sock size, shirt size". And that's all the telegram said.

The drilling crew for Byrd (led by Jack Tedrow and Bob Patenaude) came down in September, and then Bill Marshall. We didn't get into Antarctica until about three months until December, because we were assembling equipment. They had a parachute drop at Byrd that lost one fairly vital item for the drilling, but they were able to get around that problem. We were just shipping stuff down in duffle bags. These were tools and things like this. There were air force planes flying in and out of Antarctica, they were C-124s. These were the Globemasters. Big guys. Big front-end loaders. So, after three months we finally got into Antarctica. We got to McMurdo.

But the point was, I thought we were going to be drilling in rock. "No, no, no" Bill said. "We're going to drill in the ice". "What can you find in the ice?" I said. He said, "well, we got temperature and we can do stratigraphy and things like that on the core".

And I said, "well it [the ice core] must be at least 0 degrees C". That's how much I knew about glaciology. I was just dumped into this field. It was a serendipitous situation. 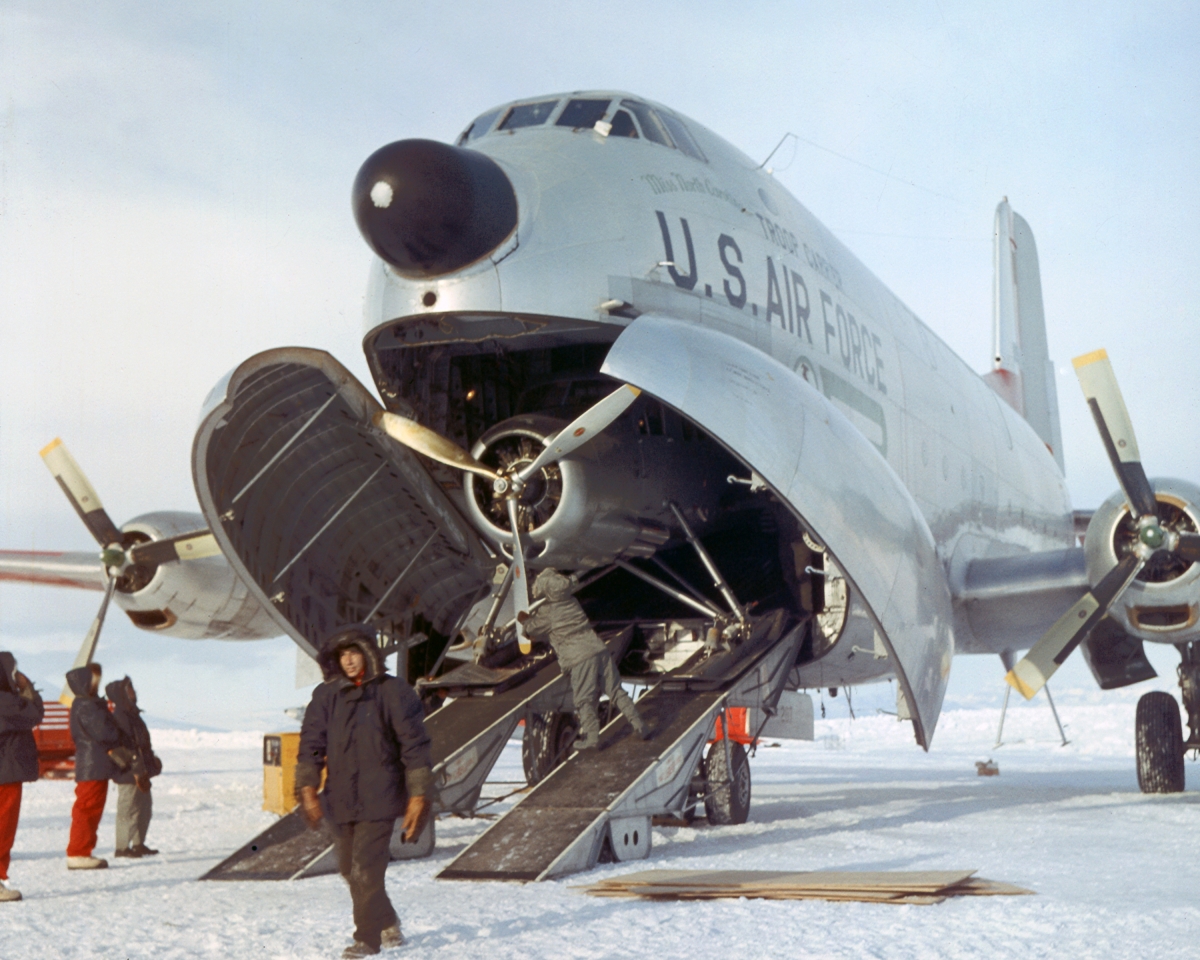 SMO: Tell us a bit about the ice core drilling during IGY.
TG: We did two drillings during IGY, one at Byrd and one at Little America V.

SMO: So, you drilled at Byrd before Little America?
TG: That's correct. We drilled at Byrd first. When we got to Byrd some core had already been pulled. We worked on that. Then, we finished drilling about...I think it was the end of January, beginning of February. We went down 308 meters. That was the first "deep drill core" ever drilled in Antarctica. And at that time that was the deepest hole ever drilled in the Antarctic ice sheet.

Then I came out at the end of the drilling program (February 1958). I was the last person out, and we came out on the last tractor swing of the season. The tractor swing consisted of Otaco sleds that were dragged behind very wide-tracked Caterpillar D-8 low ground pressure tractors. We cut the Byrd core in half, left one half at Byrd and brought the other half back on the tractor swing. It took about a week or ten days to get back to Little America V. We got onto the icebreaker Glacier, which was at Little America V at the time. We went around to McMurdo Sound and I rode all the way back to the States on the Glacier, through the Panama Canal to Norfolk. This is going into March of '58.

Then I got up to Boston. Went across to Illinois, to SIPRE, which was in Wilmette, Illinois, which is just outside of Chicago. There were two offices. There was an engineering office and there was a research office, as part of SIPRE. One was in Evanston and one was in Wilmette. We were in Wilmette. Then we got the cores back and started working on the cores. Because they were placed on the (ice breaker) Glacier and they came back with us, we got to work on them later that year. And then time came to prepare for Little America V, for the drilling there, using the same kind of drill rig. It was called a "Failing 1500 rotary drill rig". It's used in the oil fields as an exploratory drill. It has a solid string. In other words, it is not a cable suspended drill. 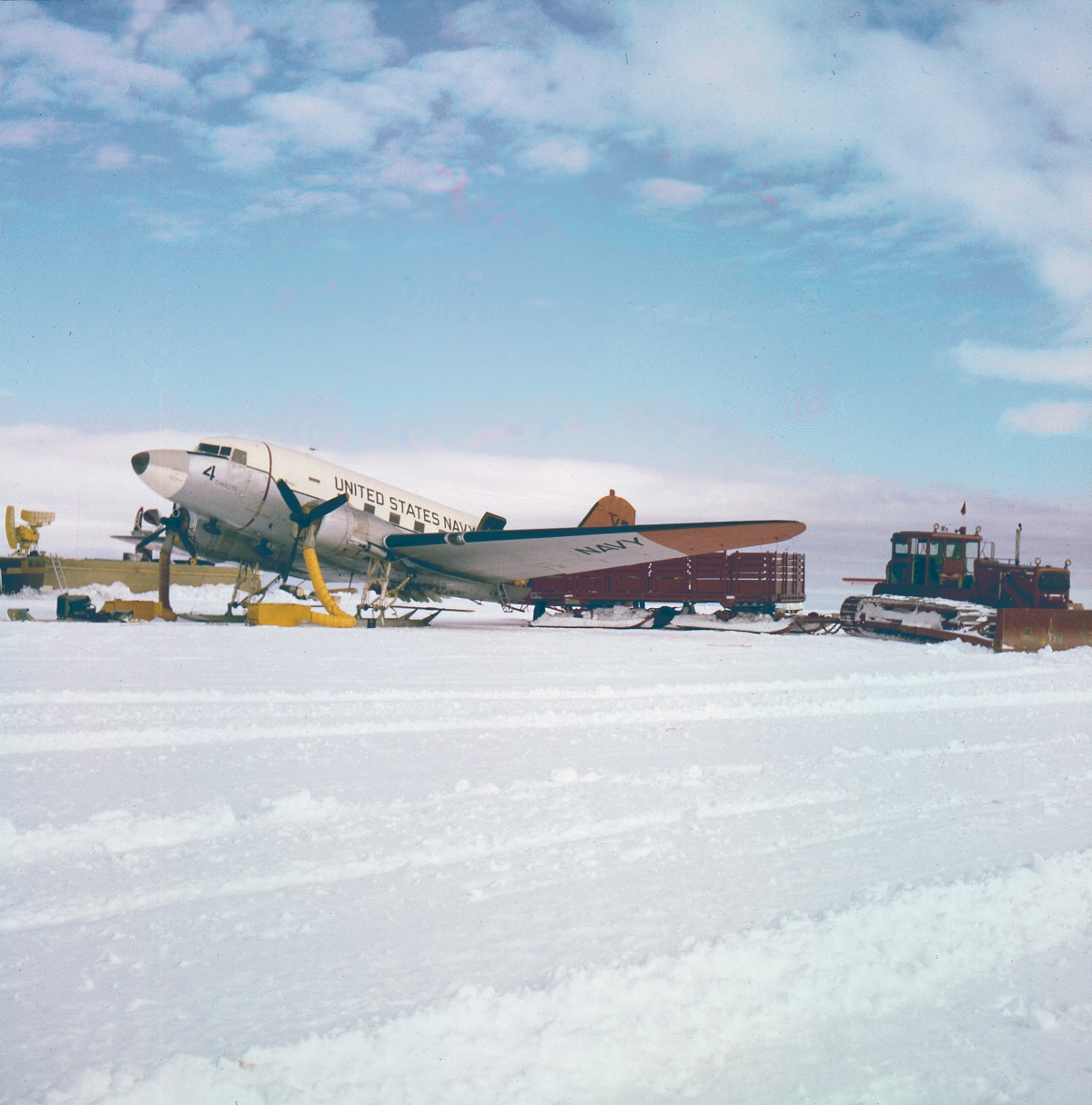 So, we were getting 6-meter long cores each run. It was a 20-foot long core barrel. After we drilled 20 feet, we then raised the drill to the surface by just taking the string of rods off and then raising it slowly every 20 feet etc until the entire thing was out of the hole.

SMO: Tell us about the drilling at Little America V.
TG: We got to Little America V in October 1958. We flew from McMurdo by R4D again. We used the same kind of drill rig as we used at Byrd. We drilled 257 meters at Little America V and we got through to the bottom and got into the seawater. And that was the end of that drilling. In fact, we didn't quite get the bottom core because a crack occurred, there was water coming up from the crack, and we just went right through and didn't recover that final bit of core at the bottom.

SMO: Did you freeze the drill in when you were drilling?
TG: No, we didn't freeze the drill in but the hole started to fill up with seawater and we had a pump to help pull the water out. We didn't go any further. We had gotten through and that was it. So, it was the first time that an Antarctic glacier had been penetrated all the way to bottom. This was on the Ross Ice Shelf. Even though it's an ice shelf, it's still a polar glacier and it was the first time anybody had penetrated to the bottom.

Then after four years, CRREL was formed. It was a combination of essentially the two facilities in the Chicago area plus a facility called ACFEL (Arctic Construction and Frost Effects Laboratory) located near Boston, Massachusetts. We combined in Hanover, NH and we formed CRREL. That's how CRREL came about, from the consolidation of the two labs near Chicago and the one near Boston. 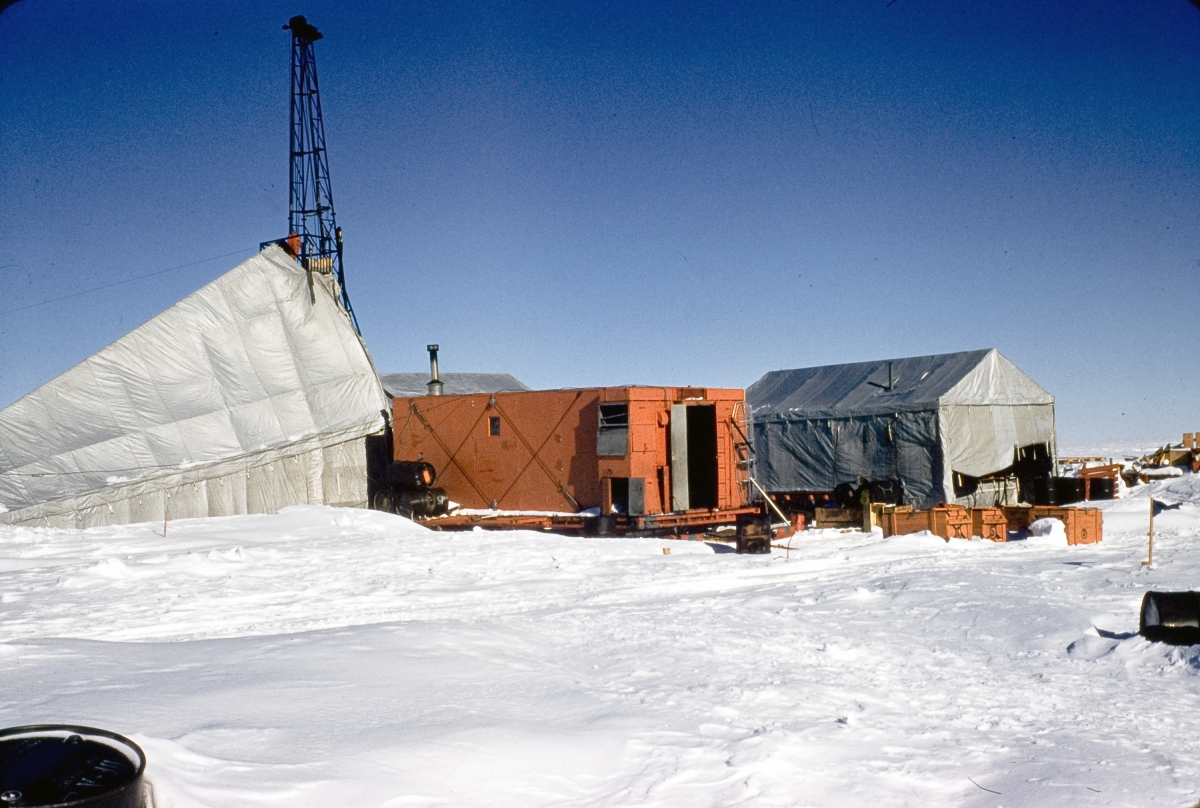 SMO: What sort of measurements did you do on the Byrd and Little America V ice cores?
TG: The regular kind of work. We were doing density measurements (density profiles), stratigraphy (for annual layer counting) as far as we could go, ice structure (grain size, grain shape, fabric), bubble structure. There was some work being done on gathering particles. These were particles taken from the core and examined by Bill Marshall, the leader of the first group (Byrd drilling). The leader of the second group, the Little America V drilling, was Dick Ragle. So, we worked on those things in the core. Those were the staple kind of measurements that people did in those days.

There wasn't much done on the Byrd core or the Little America V core, in terms of isotopes or any kind of chemistry. That came later on. It didn't really materialize until we got the '68 deep core drilling at Byrd, which went right through to the bottom of the ice sheet at a depth of 2,164 meters. 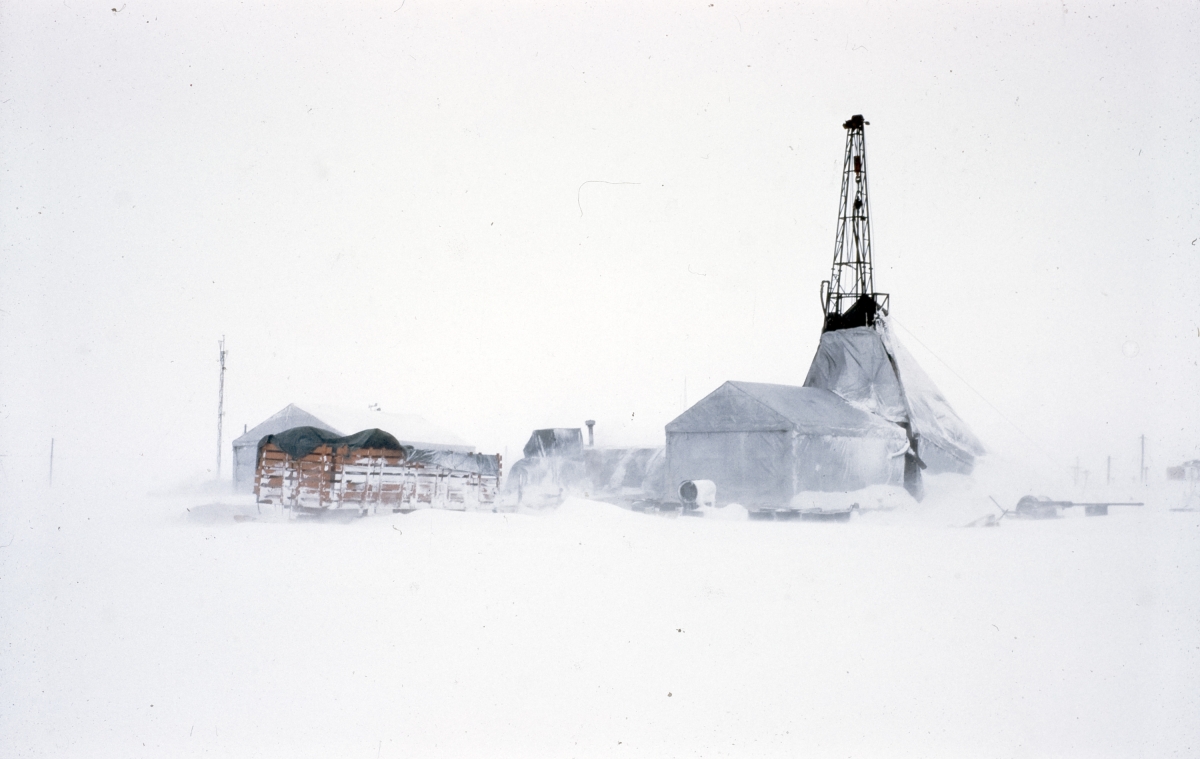